Impossible is a word we throw around a bit too often. How often have you heard a cheesy movie villain, having been foiled, scream out, “That’s impossible!” as his well-laid plans fall to shreds? Even in the real world, many times people have said things could not be done, and then been proven wrong.

Sail west? Impossible – until Christopher Columbus did it.

Walk on the moon? Impossible – until Neil Armstrong did it.

That math homework you have due tomorrow? That may actually be impossible after all.

Sports have lent us a few of these moments as well, where we mistook improbability for impossibility and were dumbfounded by truly amazing achievements, such as Michael Phelps winning 8 gold medals in Beijing, or Leicester City winning the Premier League in 2016 at 5,000-1 odds at the start of the season. Some people have even said the Cubs breaking their 108-year curse, or Tiger winning another golf tournament, could never happen, and don’t they look foolish now?

There have even been times in history where science–science–said a feat could not be accomplished, which brings me to my obscure sport of preference: distance running. For all the times you probably ran the mile in grade school gym class, huffing along wishing you could run faster just to make the pain stop, you probably never thought that at one point in history, scientists declared that a human could not possibly run faster than four minutes for a mile. Based on their calculations of human lung capacity and pain tolerance, no man could maintain the pace needed to run four consecutive laps at a sub-60 second clip. It was a feat deemed impossible.

The knight that saved us from this horror? Sir Roger Bannister – an actual knight! In 1954, he made the impossible happen by running 3:59.4 for the full 5,280 feet and etched himself in history, which is why the Queen knighted him in 1975.  And just like you often see, if someone else can do it, so can you. Within 6 weeks of Sir Roger setting the record, it was broken again, and everyone was  striving to reach the now-attainable mark.  On February 14th, 2015, 19 runners broke 4 minutes on the same day – my friend from Duke was the slowest of the bunch, but still, he gets to tell everyone that he did what once was deemed impossible. And believe me, he does tell everyone.

Why does this matter now? Because the next impossibility in running is oh-so-close to being blown away: the 2-hour marathon. People in the running community have had their sights set on this for a while now, thinking it would be the next barrier to go, but that does not take away from the sheer madness of running 26.2 miles in under 120 minutes.

If you’re reading this and not a running nerd like I am, and I know just about all of you aren’t, here’s some context. To run exactly 2:00:00 for a marathon, you need to maintain an average pace of 4:34.8/mile. There are very few people on this planet who could run that pace for 26.2 seconds, let alone miles. Makes that gym class mile sound a lot easier, huh?

But people believed the impossible could happen. A few of them happened to work at Nike, so they set up a challenge back in 2017.  They brought three of the best marathoners in the world at that time – Eliud Kipchoge, Lelisa Desisa, and Zersenay Tadese – to a flat track with a pace car going the exact pace for the entire time, gave them prototype shoes lighter and more advanced than any road racing shoe ever before created, and let them do their thing. But even in the perfect circumstances of that day, they fell short, albeit barely – Kipchoge ran the distance in 2 hours and 25 seconds.

So why now, suddenly, do I think the feat can actually be achieved? Because last weekend in Berlin, Kipchoge reset the world record to 2:01:47 – an average of 4:38.8/mile, or 4 seconds away from the barrier pace. Without a pacer, without a perfectly flat track, and without the best in the world by his side for every step. In the middle of a sanctioned road race (even if the Nike crew had in fact broken 2, the IAAF, track and field’s governing body, would not have counted it because it was not a sanctioned event), the gap to the magical number was shaven down an additional 78 seconds, which is astonishing.

The fact that it was proven in race that mankind still can reach beyond what they were once deemed physically incapable of means that the will, and the talent, is there for someone to make a push for it. And as shoe technology and training methods continue to advance at blistering speed, I truly believe that it is no longer a question of if, but when, man will break the two-hour mark.

But when indeed was a question I asked myself. So, backed by Wikipedia, Excel, and a quick refresher in econometrics, here’s my best guess:

As you can see, the curve of the record does eventually break the barrier, meaning that at our current trajectory, the world record will be broken on exactly February 7th, 2040… or something in that ballpark. 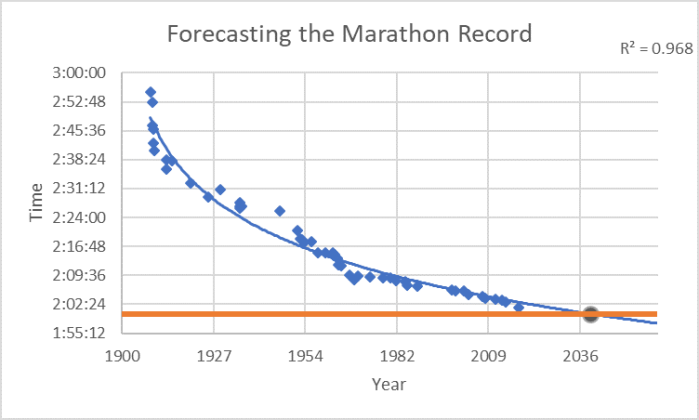 While not mathematically sound, just seeing that graph excites me about the future of the sport. People said it could not be done. Science deemed the task impossible. And yet, right there in the data, is a very powerful thing: hope. Because that faint glimmer of hope is what kick-started all of the impossible moments in history. Hope leads to determination, and determination leads to hard work, and those three together can accomplish anything.

So what will I be doing in 2040? Hopefully watching the impossible happen all over again.