Skip to content
HomeKing James turns back the clocks 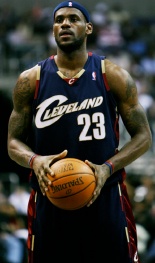 It is always fun to turn back the clocks and reminisce about the days of old. LeBron James is doing that and then some right now in the NBA Playoffs. James has been on fire in the Eastern Conference Finals and is showing shades of his 2007 self. Even beyond that, this current Cavs team is starting to resemble the 2007 versions more and more as the playoffs roll on. It is slowly morphing into the LeBron show with a couple of random sidekicks jumping in every night to make an impact. The comparison is kind of scary.

The 2007 Cavaliers finished the season number two in the conference and entered the playoffs as a true title contender. James led the way and carried a team full of relatively unknown commodities. The starting lineup around LeBron consisted of Larry Hughes, Sasha Pavlović, Drew Gooden and Zydrunas Ilgauskus. None of those guys were superstars by any means, and none of them scored more than 15 points a game in the regular season.

Obviously, this year’s Cavs have some more fire power but the pieces are continuing to fall as more of the burden falls on James. Kyrie Irving and Kevin Love both are nursing injuries that could cost them the rest of the playoffs. The Cavaliers starting lineup now features Matthew Dellavedova, Iman Shumpert, Tristan Thompson and Timofey Mozgov alongside James. None of these guys have average more than 14 points a game since the playoffs began. 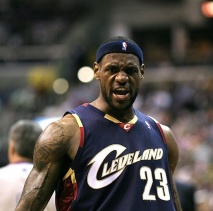 Once again, the King is forced to prove why he sits on the throne. LeBron has done a very good job of answering the call so far. In three games without Irving or Love on the floor this postseason, James has tallied 27.3 points, 11.7 assists and 12 rebounds per night. Everyone points to that 2007 squad as the team that LeBron single-handedly brought to the finals, but he only average 25 points along with 8 helpers and 8 boards. Despite being 8 years older, James is playing even better now. 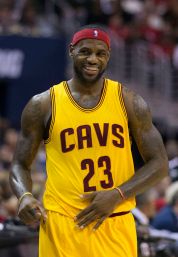 Defensively, James is playing like his younger self as well. After registering 1.6 steals and 0.7 blocks per contest during the regular season, James has turned it up a notch. The King is now posting 1.8 thefts and 1.3 rejections on a nightly basis since he’s entered the playoffs. Those numbers are identical as well to his 2007 playoff numbers.

The amazing thing is the transformation LeBron has undergone in that time. His game is very different now than it was 8 years ago but James is still proving to be productive. James is relying on his three-point shot less than ever and playing a lot more around the hoop. In fact 50.3 of James shots have come within ten feet this postseason. He continues to bang with guys in the paint and slash his way to the basket. What a difference this is now from what we saw when James relied on his jump shot and post fadeaway more often than not. 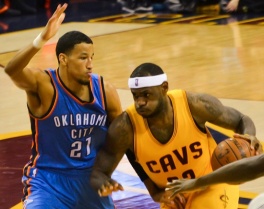 This was supposed to be a competitive Cleveland team because of the new Big 3 that was planning to take the league by storm. With only LeBron left standing of those three, they are still as viable a title threat now as they were before. Part of that is because of the three-point shooting from Dellavedova, Shumpert and J.R. Smith. Mozgov and Thompson’s rebounding certainly go a long way as well but without James this team would not have a prayer of beating Atlanta, much less winning a title.

Irving should return soon though and if he does at full strength this Cleveland team could challenge Golden State in the Finals. They would be deep enough at guard to contend with the Warriors backcourt rotation and they can answer with some three-pointers of their own. I am pulling for a Warriors-Cavaliers matchup now just because of the intensity that series could bring. James would likely faced Draymond Green on a night-to-night basis, which would be a great matchup. LeBron is hitting his stride at the right time so even Green might have trouble King James.

2007 might be long behind him but if James continues to play like he’s 23, he might just land himself another title and really turn up the heat on the conversation for greatest player of all time.

One thought on “King James turns back the clocks”