There has not been much occurring in the world of football since the draft ended back in early May. The NFL changed that today with the announcements that four different players had been suspended for violating the substance abuse policy. The Jets’ Sheldon Richardson, the Chargers’ Antonio Gates, the Cowboys’ Rolando McClain and the Packers’ Datone Jones all received suspensions to open this 2015 NFL season. The first three players are set to miss the first four games while Jones will only miss the season opener.

Four players being suspended in one day is pretty rare. All for the same thing makes sense as the league probably received the drug test results recently. These suspensions could have some pretty serious ramifications on the upcoming season as well as the players missing time all find themselves in starting roles.

For the Jets, this means that Leonard Williams’ time is here. With Richardson out of the lineup, it is safe to assume that the rookie defensive lineman will be lining up next to Mohammed Wilkerson and Damon Harrison for the season’s first four games. Richardson has been a force on New York’s defense each of the last two seasons. If anything though, this could be a blessing in disguise for the Jets. It gives their first round pick some very meaningful playing time right off the bat. If he struggles, then Richardson returns after four weeks and reclaims his spot easily. If Williams excels, then the Jets have great depth going forward and a fresh Richardson for the final 12 games. 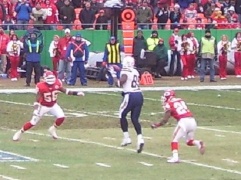 The Chargers will likely be in a bit of a bind with Gates missing the first four contests. The 35-year old accounted for 821 receiving yards on 69 catches to go along with 12 touchdowns last year. Replacing that production will not be easy and San Diego’s potential replacements are very unproven. Ladarius Green and John Phillips are the only other tight ends on the roster at the moment. Green and Phillips combined fall short Gates production last season over the course of their careers. Each has caught only three touchdowns and they have roughly 850 yards between them. Needless to say, the Chargers will be hurting at the tight end position until Gates returns.

McClain only played 13 games last season anyway so the Cowboys know how cope without him. That doesn’t mean that they would like to lose him for another four this year. McClain was part of a defensive resurgence in Dallas last season as the unit went from being the worst-ranked to middle of the pack. The Cowboys’ defense was nothing special but it got the job done. Losing McClain’s production in the middle definitely hurts Dallas’ run stopping efforts and he is a sure tackler. This loss might not sting for the Cowboys as much as Richardson or Gates does for their teams, but with games against the Giants, Eagles, Falcons and Saints to start the year, Dallas will need all the defensive help it can get.

Green Bay gets off a little bit easier only losing Jones for one game. However, that one game is against their hated rival Chicago. Jones did not have a huge impact on the Packers’ defense a year ago, only registering 22 tackles and 1.5 sacks but he was a crucial part of Dom Caper’s rotation up front. Not having him available certainly throws a wrench in preparation and rotation. Josh Boyd is sure to see a whole lot more playing time as he should slide into Jones’ starting role. If Boyd really impresses in the first game, we could potentially see him hang onto the job for some time after Jones returns.