What a whirl it has been already on the quarterback carousel in the NFL. We got a really early taste this year before the season even began when Geno Smith had his jaw broken by a teammate in the locker room. That thrust Ryan Fitzpatrick into the starting role and the Jets have opened their season 2-0.

Week 2 dealt some serious blows to the stability of the quarterback position across the league. Drew Brees played all of Sunday’s game against the Bucs but he may miss next week with a bruised rotator cuff. That would place journeyman Luke McCown into game action for the first time since November of 2011. That isn’t exactly reassuring for the Saints but Verizon has to be thrilled. Believe it or not this actually affects Mark Ingram more than anyone else. The former Heisman winner has never had the chance to be a feature back in an offense but if Brees cannot play or is limited, the focus quickly shift to him to deliver. And he will need to deliver fast because the Saints are 0-2. Panic Level: Moderate 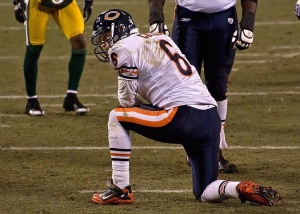 In the Windy City, the Bears are already in free fall and Jimmy Clausen is set to retake the starting role, if only temporarily. Jay Cutler has a hamstring injury that Chicago has said will keep him out at least two weeks. Clausen filled in for Cutler last year after the latter got benched. He was passable, tossing two touchdowns but also throwing a pick. The more concerning thing is that he actually sustained an injury in that game last year, forcing Cutler back into the lineup. If Clausen were to go down, Chicago would really be in trouble then. The last quarterback on the roster is youngster David Fales from San Jose State. If he has to start for the Bears, this team will be in full scale crisis mode. Panic Level: Low (they can’t be much worse).

Dallas ended up taking the brunt of the pain from the losses this week. Tony Romo fractured his left collarbone, which will keep him out for the next eight weeks. The Cowboys have already begun handling his loss. They placed Romo on the short-term IR and traded for veteran Matt Cassell as a reserve option if now-starter Branden Weeden struggles or suffers an injury himself. Neither quarterback is much good but they are both serviceable, which is the best Dallas could hope for as they try to ride out the storm. Despite losing Romo, the Cowboys could still hold the division lead when he comes back based on how poorly the rest of the division has played. However, with Dez Bryant also out for probably a similar time frame, things in Big D are shaky. Everything is bigger in Texas, including the panic that should be surrounding this team. Panic Level: High

I am starting to wonder if the Browns are afraid of success. After nearly reaching .500 last season, Cleveland made a number of questionable veteran acquisitions, including Josh McCown. They needed a quarterback for sure but not many pegged McCown as their savior. McCown entered the season as the starter but a nasty hit in the season opener left him with a concussion. In stepped the polarizing Johnny Manziel. He was far from perfect or even polished but he was productive. Posting to three touchdowns to just one interception in roughly seven quarters of relief work isn’t bad. The four fumbles are definitely concerning but Manziel has regularly kept plays alive and made something out of nothing. He isn’t throwing for a ton of yards but his is picking up a lot of yards when he does throw. He has been electric and exciting, something Cleveland has not had in a while, but the Browns maintain that once McCown is healthy, he will get his job back. I know I initially advocated against it, but after two weeks, I would like to see some more Johnny Football. They won too in Week 2, which is definitely a positive. A game against the Raiders could be winnable as well and would be a really good test for the young Manziel. Cleveland fans should actually start to panic if their original starter is in fact healthy, oddly enough. Panic Level: Moderate