Chicago is in full scale remodel mode. Already, Jared Allen and Jon Bostic have been sent packing to the Panthers and Patriots respectively. Rumors have listed Alshon Jeffery and Matt Forte as potential targets to follow. I wouldn’t be surprised if veterans Martellus Bennett and Shea McClellin follow them out the door. The Bears are headed in a new direction under head coach John Fox and seem to be fully embracing hitting the reset button.

So now it seems like many of the Bears’ aging stars are on their way out. The question is, where will they end up? I am going to take my best guess based on what can be offered in return, different needs for teams around the league and who can afford to take on these contracts. 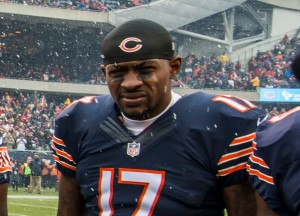 More than anything else, the Ravens need a big body receiver for Joe Flacco to throw to. Baltimore desperately needs another receiver in general. Flacco has targeted Steve Smith Sr. 40 times through the first three games. He has targeted every other receiver on his team fewer than 20. No one is even near as effective as Smith on a per game basis either. Smith is averaging 116 yards per game receiving and the next wide receiver on the stat sheet is Kamar Aiken with 29 yards per game. Implementing Jeffery into this offense will provide the spark Baltimore needs going forward. Chicago can probably demand a high round pick, possibly a second rounder, plus youngster Matt Elam at safety. That is a decent haul for the former second round pick. 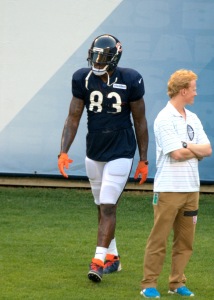 Give Peyton Manning a 6’6″ tight end and just let him work. Denver has struggled to moved the ball on offense so far this year so adding Bennett could be one of the final pieces that the Broncos need to make that Super Bowl push. Virgil Green and Owen Daniels just aren’t getting it done so far this year. The two of them combined have 90 yards combined in three games. Bennett has 118 on his own. Giving Manning a safety valve on his plays and Gary Kubiak another red zone threat would help balance out Denver’s offense. John Fox would probably be willing to do business with his old team too, knowing the players in the system. A fifth round draft pick plus either Ronnie Hillman or Juwan Thompson should be enough for the Bears to part with the veteran tight end.

Trading within the division is always questionable but this makes sense for both sides. Shea McClellin was a first round draft pick by Chicago back in 2012 and the Bears expected him to develop into a star pass rusher. That never happened and McClellin now serves as a back up in the Windy City. Over in Green Bay, Sam Barrington is done for the year already and Packers are pretty light on linebackers at the moment. Adding McClellin would allow Chicago to move on from their former first rounder and it gives Green Bay a young player who could provide some depth. Look for McClellin to be moved for cheap. The Packers could probably land him in exchange for a fifth rounder. 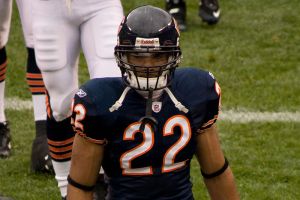 This might seem kind of odd honestly. Why is Tennessee making a move for a veteran running back like Forte? Well, they don’t have an answer right now at running back in Tennessee and Matt Forte can do it all. He is an added weapon in the passing game as well for rookie quarterback Marcus Mariota. Mariota has played out of his mind so far to open the season but he needs some more help. Taking the pressure off the young signal caller by adding Forte would be the smart move, especially with how weak the AFC South looks this year. The Titans almost upset the Colts this past week and actually sit tied for the division lead heading into Week 4. Forte might just be the piece the Titans need to put pressure on the Colts in the wide open South. Forte won’t come cheap but he is a 30-year old running back. Fox would likely let him go in exchange for a third rounder and maybe a conditional future pick.

So the Bears would make out with Matt Elam, Ronnie Hillman/Juwan Thompson, a second round pick, a third round pick two fifth rounders and a conditional future pick. That isn’t a bad way to go moving forward. Chicago needs a fresh start more than anyone else in the league. Setting themselves up for the future begins with letting go of the past.