Leonard Fournette is doing everything right so far at Louisiana State University. He is dominating the NCAA field at an SEC school and drawing comparisons to some of the best in college football history. Already, we’ve heard names like “Emmitt” or “Herschal” thrown around when describing the phenom running back.

NFL scouts have already seen enough of Fournette to justify taking him when he is eligible to come join the NFL. Through five games this year, he has amassed 1022 yards on the ground on 8.6 yards per carry. Pair that with his 12 touchdowns and you have a solid season for a lot of college backs. Fournette has reached those marks in only half a season.

The issue is though, Fournette isn’t eligible to jump to the NFL until the 2017 NFL draft. He looks pro-ready today but NFL rules state that he must wait until after his junior season to apply for the draft. So now Fournette faces a very tough decision. Should he continue to play for the Tigers, or should he sit out his junior season to cement his draft status?

Fournette could probably sit out the entire 2016 college season and still go in the top half of the first round if he continues to stay in shape and performs well at the combine.

Many have called Fournette selfish for thinking that way but honestly can you blame him? NFL first round picks sign contracts worth millions of dollars. Todd Gurley, a former running back from Georgia, signed a contract this season after being drafted 10th overall that was worth up to $13.8 million over four years. The contract guaranteed $9.3 million over the four years and Gurley received a $2 million signing bonus upon signing the contract.

All of that is probably pretty comparable to what Fournette would stand to make and honestly it is probably below what he is worth. Many are viewing the LSU back as the best running back prospect since Adrian Peterson. He would likely go higher than 10th overall and with the increase over the next two years, his contract would probably be even a little larger.

So we are talking probably upwards of $20 million on the line here for Fournette. All he has to do is stay healthy and avoid a drop off heading into the draft. The only problem is that there is no easy way to avoid injury other than to sit out. Fournette has nothing financially from the NCAA to fall back on if he blows out his knee or develops a hernia. His draft stock would plummet and he might not even make it to the NFL.

Thinking for the future makes too much sense at this point. We see it happen to players, especially running backs all the time. A couple of years ago, Marcus Lattimore suffered a gruesome knee injury that derailed his promising college career. Lattimore was a lock for a first round pick but the October injury where he tore every ligament in his knee and dislocated it obviously set him back. He had surgery and began rehab as soon as possible. He declared for the NFL draft in December knowing that it was his best shot at going pro. He fell all the way to the fourth round to the 49ers. He signed a four-year deal worth up to $8.5 million but with only a $300,000 signing bonus. Lattimore spent two seasons on San Francisco’s reserve roster before finally retiring when he realized he would never be able to play again.

Obviously, that is an extreme example but it is not the only one. Just a week ago, Nick Chubb suffered a serious knee injury where he tore several ligaments and damaged cartilage. His ACL was not one of the ligaments torn, which gave doctors hope at first, but now reports have surfaced saying that the injury could be career ending. He will have surgery soon but the outlook is less than positive. Heading into this season, Chubb was a projected first round pick for 2017, just like Fournette. 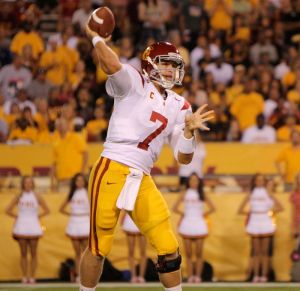 Then there are players who avoided injury but still saw their draft stock plummet due to poor play. Matt Barkley is the perfect example of a player who was deemed NFL ready, but who decided to stay in college another year. He seemed to be a certain top 10 pick in the 2012 draft but Barkley decided to stay at USC for his senior year. Barkley muddled through an up and down season and then fell to the fourth round of the NFL draft in 2013.

It is hard to shame Fournette for considering sitting out and it will be harder still if he decides to skip his junior year. He has every right to and he would be protecting his future, which is completely uninsured by the NCAA.

Each NCAA athlete has a health insurance policy of $90,000 for medical expenses. They are willing to cover other costs such as in-home care if it is required but there is no way for students to ever recoup any of the money they might have made.

There is no sure-fire way to solve this situation and I won’t pretend to know what it is. It might be to compensate athletes. It might be to provide some sort of insurance if athletes are unable to continue to the professional level due to injuries sustained while playing in college. All I know is that it needs to change. If the NCAA can profit as much as it does from these kids, then there should be a way for the kids to get compensation for a major career-altering or ending injury.

If the NCAA refuses to pay athletes, guarantee insurance fund for those who cannot continue to the pros because of injury or some combination of the two, it will continue to see Leonard Fournettes in the future. If Fournette sits, he will set a precedent. There will be players who believe that they have shown enough talent and ability to make the jump to the league and will refuse to continue playing in college. It will hurt the college game in terms of the level of play and could begin to undermine college football as a whole.

This development would be many years down the line but it is not unrealistic if the NCAA does not find a solution. Players who have serious aspirations of playing in the pros view college as a stepping stone and if they can find a way to minimize the risk that comes with that stepping stone, you can bet they are going to take it.