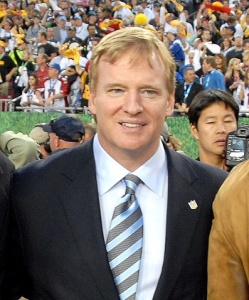 I love PTI. Tony Kornhesier and Michael Wilbon may be the best duo in recent sports broadcasting history. I was shocked yesterday to hear Wilbon bring up the idea of Roger Goodell losing his post as commissioner of the NFL. Well that isn’t the shocking part, I’ve been saying Goodell needs to go for a while now. What caught me off guard was the reason why Goodell would be let go. For punishing the Patriots. Not for the botched Ray Rice case or the on-going Adrian Peterson saga, but for Deflategate.

Ironically, out of all of the massive controversies involving the NFL this season, I thought Goodell did his best work in handling the deflated ball scandal. He left himself out of the investigation and then made a ruling that clearly sent a message that this sort of conduct would not be tolerated. He might have been a little harsh, but with all the leniency Goodell provided in regards to Rice and Peterson, he might have felt a little bit pressured. To me, Goodell did his job, and did it well. 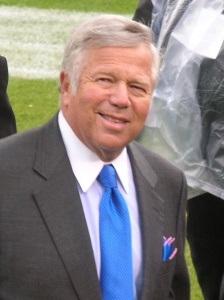 Apparently, Patriots owner Robert Kraft does not share the same sentiment. His long-time friend is now openly criticizing Goodell. Kraft felt that the punishments were undue and not formulated in concrete evidence. Wilbon’s point was that through all of the other adversity the league faced this year, Goodell always had the backing of the owners. Now, he might have lost that, because the ruling directly affected one of them. Wilbon pointed out that Kraft could push for Goodell’s tenure to end the next time he is up for election, which is in 2018. Wilbon noted that is unlikely that anything would happen before then, but he would not be surprised if the end for Goodell was in the near future.

All this really shows is how callous, corrupt and greedy the NFL has become. They are willing to back the commissioner through domestic abuse issues and bounty scandals so long as he continues to deliver profits. The NFL made a ridiculous 9.5 billion dollars in revenue in 2013, which breaks down to about 261.5 million dollars per team. The owners get to stay rich as long as the money keeps flowing in. The league compensates Goodell pretty handsomely as well, more than 44 million dollars last year to be exact. Goodell has proven to be a strong business partner for the NFL. As long as he kept generating revenue, the owners would be more than willing to weather whatever storm Goodell brought with it.

Now though, faced with a situation where a team, and to a further extent an owner, took the brunt of the penalty from Goodell’s actions, the owners are ready to run him out. It shows on one level that the owners value the brand of the team and the money made way more than they value the players. The Ravens were in full compliance with suspending Rice and the Vikings openly supported Goodell with his plans for Peterson. The Patriots are furious about losing Tom Brady for four games but seem to be more enraged by the docking of draft picks and heavy fine. At least that’s my perception.

Goodell, in doing his job how he saw fit, might actually find himself looking for a new employer. He has made many a mistake in his handling of so many different cases. He has bordered on corrupt at times, with his mostly unchecked use of power to hand out suspensions and fines. And the owners have supported him through all of it. The league is willing to be corrupt as long as corrupt pays. The NFL is all about making money. I as a fan find this disheartening because I can see it in more places than just this. The steady rise in ticket prices, the removal of blackouts, the increased number of sponsors and the continual blind eye turned to player safety. The bottom line is all in the profit. The league makes its moves based on how much it can stand to gain from them.

It makes it hard to support a league that has so many major flaws. That is run by a system that continually fails its players and fans. That allows for inhumane behavior and repeatedly breeds violations of the law. That is more focused on the bottom line than the product. Greed runs the NFL. This is a league that is out to make as much money as possible, despite inexplicably being listed as a non-profit. There needs to be a change in the NFL and how it is run. It pushes me to the point where I do not know how much longer I can support the league. I simply do not want to get behind an organization that continues to disappoint and deteriorate. On the bright side, I would probably have a lot more time to watch PTI.